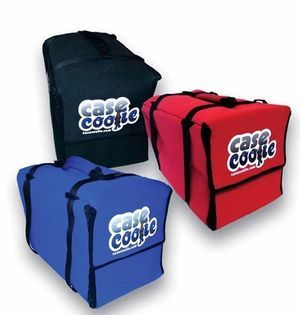 You always have a koozie for your beer, right? Of course you do, I do too. Normally when you have a case of beers you’ll dump them into a cooler and fill with ice to head to the tailgate, but sometimes a big, bulky cooler won’t work for every occasion. That’s when you need the Case Coolie.

The Case Coolie is literally a koozie for a case of beer. It can hold a 12 pack all the way up to a 30 pack of beer. You simply get the case of beer and slide it into the Case Coolie. You then seal the end with the velcro and off you go. It has a handle or shoulder strap for easy transportation.

This seems like a great idea if you don’t want to lug a cooler around, but still want to keep your case of beer ice cold. I put this to the test recently when I stopped by Spec’s and grabbed a case of Sweetwater Brews. I checked and the temperature they were keeping the beers in the fridge was about 39 degrees. I pulled the case of beer from the cooler and slid it into the Case Coolie. I checked out and then tossed them in the back of the car. A little over an hour later I made it home and figured it was a good time to have a beer. I pulled the case of beer from the Case Coolie and cracked one of the cans open. The temperature on my home thermometer was 47 degrees, so there was around 7-8 degrees of warming of the beers. I tasted it and it still tasted nice and cold, so it passed the taste test as well.

There is no ice or cooling agents used with the Case Coolie, as it is simply about retaining the coldness of what you place into the Case Coolie. The Case Coolie is great if you need to keep a case of beers cold for a couple of hours and don’t want to haul a big cooler around. The only downfall noted, that I saw after I filmed the video, was that one of the pieces of velcro started to come off, when I opened the Case Coolie up.

PROS: easier way to keep a case of beer cold on the go, no ice is used

The Case Coolie comes in three colors and if you’re ready to put a koozie on your next case of beer then check them out.