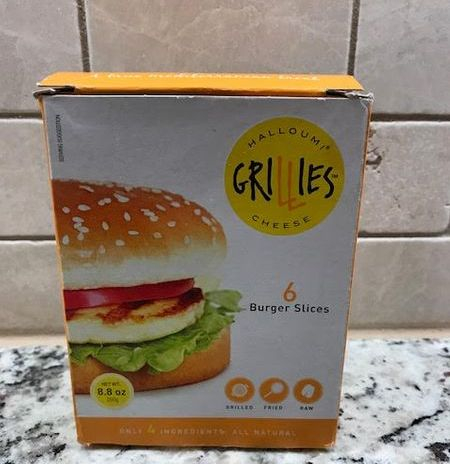 If you tailgate then there is a good chance you grill too. We know the classic tailgating go to’s: Burgers and hot dogs. There are two problems with the classics (not that I don’t love a great burger): these can get boring every weekend, or you have someone in your crew that doesn’t eat meat.

The team at Grillies have made a true CHEESEburger where the cheese is actually the burger and you can grill it! My first thought was if you grill cheese then its going to be a mess, right?…Wrong! Grillies are made to be grilled just like a burger and hold their shape great.

Grillies are made from sheep milk and there are 6 in a pack, I like to make mine a double Grillies.

I seared the Grillies ‘burger’ on both sides and it browned up nicely, while never getting messy. I then built my ‘burger’ as I would normally. I filmed the video below to show my first time ever tasting a Grillies and was pleasantly surprised on how much I liked it. In hindsight, I’m not sure what there would be not to like since I LOVE cheese;)

PROS: Six in a pack, something different for your tailgate, an option for vegetarians, flavorful, doesn’t become a gooey mess on the grill like other cheese may.

CONS: It was hard for me to differentiate the 6 different patties in the package as it mostly appeared like one block of cheese that I used a knife to divide up. Also, they can work on their shipping to include more dry ice/insulation as summer nears and its getting HOT down south.

Overall, I enjoyed my Grillies and this is a fun new option for the grill this tailgating season. If you love to grill and you love cheese why not try it and see how you like it?