The Super Bowl is this Sunday and what better way to celebrate it then by having a tailgating challenge between the teams.

First up, the 49ers tailgate by the bay in front of Candlestick park. They have a legendary figure known as the banjo man who attends all the home games and works to get the tailgaters and fans in the stadium pumped up for a niners victory. The Tailgating is done literally steps away from the ocean so, on a fall day you can feel the sea breeze throughout the tailgating festivities. On a rainy day however this area is prone to flood, so beware! The Bud Light Goldmine is also a must see. It is inside the statdium and has huge tv’s playing other NFL games with a live DJ and plenty of food and drinks. The other attraction to visit is “Faithful City”, this is a family friendly area and has free admission. The 49ers cheerleaders, as well as the mascot will make appearances. There are usually retired 49er players that may also pop up in this area.

Next up you have the Baltimore Ravens. The Ravens tailgate in a much colder part of the country in Baltimore, MD outside of M&amp;T Bank Stadium. They also have some legendary figures known as the Fan Man and the Bus Boys. This crew drives around the tailgating lots letting off the infamous Raven call to spark up the fans and to show the visitors who runs things. The cool thing about the tailgating outside of the Ravens stadium is that they have lots that are designated to your tailgating taste. Some lots are for the hardcore and wild tailgaters, while others are family friends lots or special needs lots. Most places its a mix of everyone in the same parking lot, so this is an innovative idea.

Who throws the better tailgate? Only the fans can decide that! 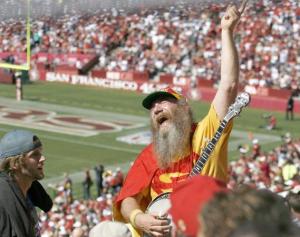