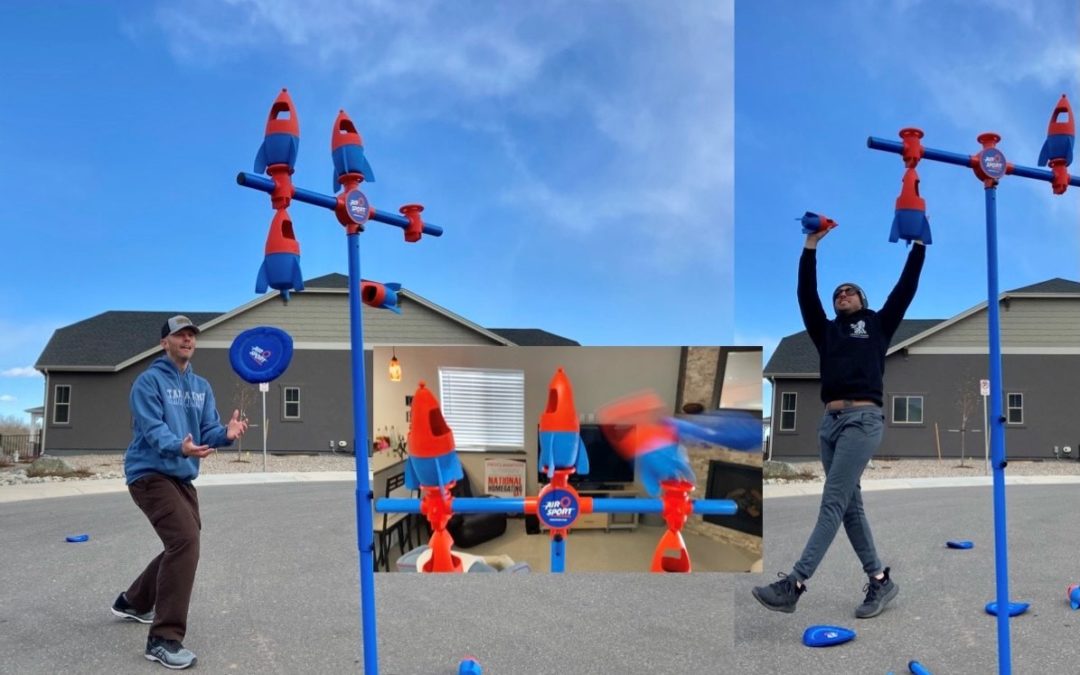 Yard games are becoming even more popular, especially with more people spending time at home in 2020. We have been testing yard games for years and love seeing the new games that hit the market. Anything with frisbees gets me excited to play and Air O Sport as some unique, soft frisbees. Let’s take a deeper dive into learning about the Air O Sport game.

We got our Air O Sport game in and opened the carrying case to show you what is included and how to set it up in the video review, below. Initial reactions as we unpacked the game was that it was made with high quality materials. Poles are made from aluminum alloy and look they they will hold up great over time.

Let’s take a look at set up and some of the suggested ways to play Air O Sport from https://airosport.fun/

OTHER WAYS TO PLAY

Think ultimate frisbee! Set up 2 towers on opposite ends of the court or field. Just like in soccer or ultimate frisbee, each team is trying to score at one end and defend the other. First team to knock down all 5 rockets wins the game.

Set up towers side by side and break up into two teams. With one person from each team throwing one disc at a time, work together to knock off all your rockets before the other team. Can be played outdoors or indoors with towers backed up to a wall.

Let your inner Dude Perfect shine by picking fun trick shots. Call out your shot, then see if the next shooter can match it. Whoever reaches 10 points first wins!

Work on spatial awareness and shooting on the run. Feed the shooter as many discs as needed as they rotate around the O until all rockets are knocked off the tower. Keep score by the number of discs needed to knock off all the rockets.

Set a timer for 60 seconds, then take 5 shots to see how many rockets you can knock off. For each rocket left on the tower, pick a multiplier of how many reps of any exercise you choose. Repeat until rockets have all been knocked off tower. Remount if necessary and continue until time runs out.

WARNING: This can be an extremely intense cardio workout!

Break into 2 teams. Each team gets 4 throws per round. The throwing team gets 2 points for direct hits. Defending team gets 1 point for catching the rocket before it hits the ground. First team to 21 wins.

Fill the bottom rockets with water and take turns standing behind the water filled rocket while others toss a disc and try to make it splash. Last person standing to be dry wins! Take the splash to the next level by throwing water balloons at the rockets.

Did winter come too soon? turn Air O Sport into Air O Snowball by trading out the discs for snowballs! (we will be trying this soon)

This game as a ton of different ways to play, but our favorites are trick shots and the team game where you try to knock the rockets off while the defender attempts to catch the falling rockets.

We played this game for hours and completed some fun trick shots that you can see in the video below. I like the fact that there are 5 rockets, so there are more scoring opportunities than some games that just have one target you’re trying to knock off with your frisbee. The times where you knock of multiple rockets is an extreme challenge for the defender to try and focus and catch multiple rockets.

CONS: the soft frisbees don’t ‘fly’ the same as a standard frisbee

Overall, this was a fun game that we spent way longer than anticipated during our testing, as we were just having too much fun with all the creative ways you can play. Air O Sport survived our Tailgating Challenge.

Learn more and get your own by visiting AIR O SPORT

Love learning about all the cool, new products we get to test out? Make sure you take a minute and check out some of our recent PRODUCT REVIEWS.

We NEVER get paid for our reviews. This way we can keep it real with you. We were sent a sample game to test out.