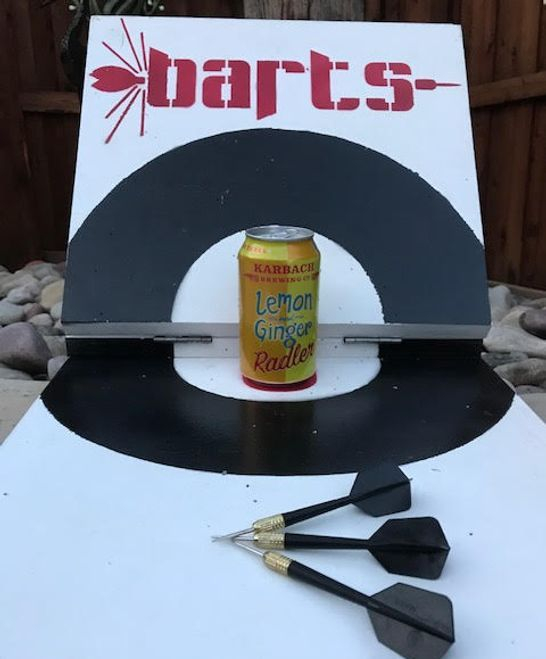 Tailgating and fun go hand in hand. With that comes a sea of fun tailgating games to help you challenge your friends to fun and some bragging rights. The newest game we got to check out is BARTS. How does it get the name simple: Beer + Darts = BARTS.

The portable game of BARTS takes darts and mixes in an element of drinking game, should you want to play that way. The good thing is that you can play it without drinking, should that be more up your alley.

The BARTS game is a wooden board that has a circular target painted on with black being the outer ring and worth 1 point, white being the middle ring and worth 2 points and red being the bullseye and worth 3 points. You can play to whatever point total you like and when you want to step up the fun you can add an aluminum can beer to the mix that will sit where the red bullseye target is.

When you play this way the points are the same, but should you hit the beer can it will puncture and your opponent has to drink it down to the hole, so if you sink one in in the very bottom it’s game over quickly.

After playing this way I decided to switch things up just a bit. I finished drinking an entire beer can and then filled it up with water to use for the game. When the beer was punctured you lost a lot of the beer, as it was spewing out of the hole from the dart, and I’m not a fan of wasting beer:) The refilled beer can with water plays the same way except you don’t have to pick it up to drink each time. Adding the full beer or refilled can makes the game more fun as you really want to hit the can to watch the liquid shoot out.

The game comes with 3 red and 3 black darts that you place in a pouch that is attached to the board.

PROS: Fun game that you have to play with the can, portable as it folds up and has an attached case for the darts.

CONS: As mentioned above, not a fan of wasting the beer so I adapted mine. I’d like another dart or two included as well to make the game play better or should you lose a dart you have a spare.

Overall, I was skeptical about this game when I first recieved, but after a night of playing it the overall consensus was: “wow this was more fun that we expected and kind of addicting.”

To get your BARTS game visit them at:

*The views above express my opinions and mine alone. Remember to always drink responsibly and NEVER drink and drive. #StaySafe