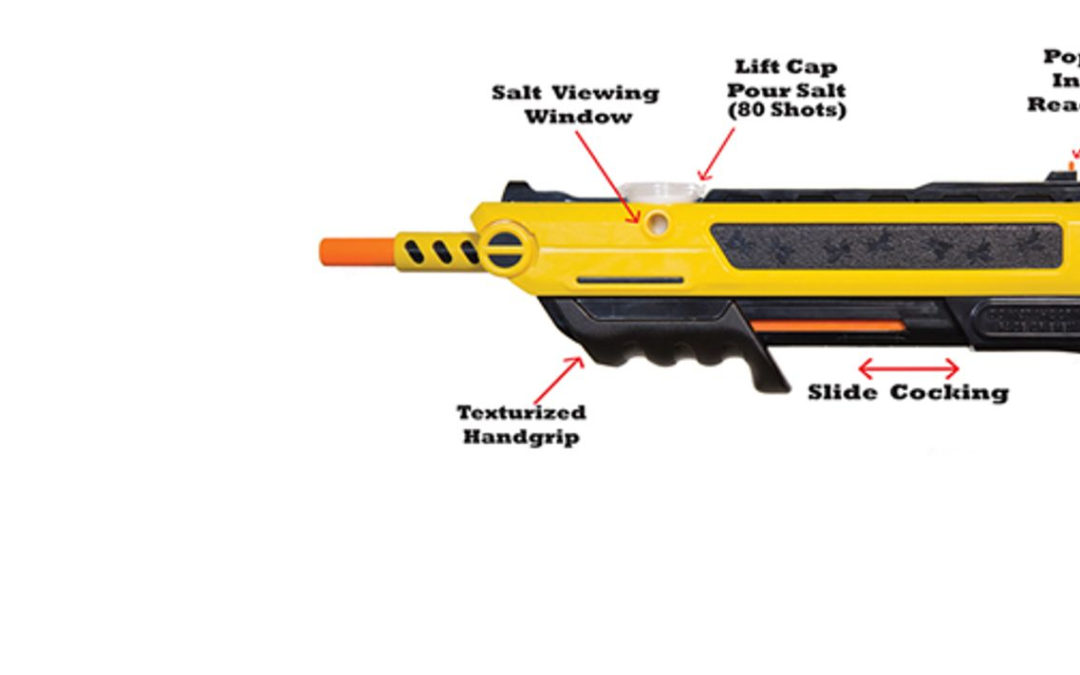 Let’s be honest, we all hate flies at our tailgate, or just about anywhere for that matter. One thing I can never find at a tailgate is a fly swatter. If I do, find one, I end up knocking over everything trying to kill one pesky fly. There needs to be a better way to rid yourself of pesky bugs and now there is with the Bug-A-Salt.

The team at Bug-A-Salt made the most fun way ever to get rid of those unwanted flies. They made a gun to shoot flies with regular old table salt. That’s right, SALT. Just put a few pinches in the ammo load section, cock it (a site pops up) and then blow the flies away.
At first I thought ok, how is salt going to do anything to a fly. After getting the Bug-A-Salt in I was able to test it out on a few things to test the power. Lets just say this little bit of salt packs a much bigger punch that you’d expect. I shot a HUGE Texas fly (you know everything is bigger in Texas) and it knocked him down and incapacitated him. He wasn’t dead, but he wasn’t splattered everywhere either. He was in one piece and easy to pick up and dispose of.  The shot pattern of the Bug-A-Salt is like a shot gun as it sprays the salt out when fired. This means you don’t have to be dead on accurate with the shot as it will give you some grace.
CHECK OUT THE VIDEO BELOW TO WATCH IN ACTION
They have now added a laser site that can be added to all models of the Bug-A-Salt gun to really take the fun up a notch. The new laser site slides over the barrel of the gun and you push the power button to be able to put a red dot on your next victim. By victim I mean bugs of course. This takes an already fun idea to the next level.
Once you get your Bug-A-Salt gun you’ll be CHALLENGING bugs to come to your next tailgate or backyard BBQ, as you’ll be ready for them.
PROS: Most fun way to rid yourself of flies, has a built in safety, packs more punch that you’d expect.
CONS: while its only a small amount, per shot (it can shoot 80 shots if fully loaded) there is salt that is shot out, so if you go too crazy in your house there will be small amounts of salt that will need to be cleaned up.
Overall, this is just fun. You may not NEED one of these, but come on a gun to shoot flies?  You and your friends definitely WANT this.
Order yours here:
http://www.bugasalt.com/
*Reminder do not point this or any other gun at another person. Tailgating Challenge and Bug-A-Salt do not condone violence. Just killing flies.