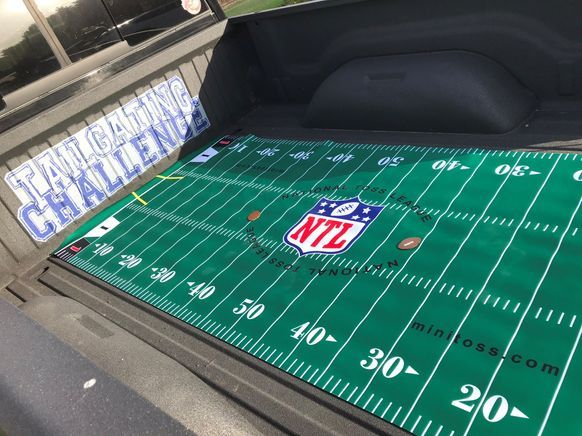 Washers is a classic tailgating game that many people enjoy playing. The team at MiniToss took the idea of the iconic washers game and added some twists to make it even better for tailgating. If you love tailgating and the Washers style of game then read on.

The MiniToss game uses small metal football’s instead of washers. They even went so far as to paint the laces on the balls. You are throwing these footballs on a football field. The game comes with a durable 40X90 football field mat that you will throw the footballs on to try and score TD’s, FG’s and you can even get first downs and interceptions.  The game mat looks amazing and has sharp colors. I love the field mat as you can leave it out at a tailgate and adds to the décor of your tailgate, even when you’re not playing the game.

Ok let’s get on to tossing some washers…I mean footballs.
-Standing arm distance away toss the footballs across the mat to score .The 4 footballs represent 4 downs, and a football that does not land on a score is an incomplete pass.
-Touchdown (6 points): To score a touchdown the football must be completely passed the end zone line, and maintain at least two marks within the end zone.
-Field Goal (3 points): To score a field goal two marks on the football must pass the 5 yard line and stay within the goal post. You must announce a field goal attempt prior.
-Extra Point (1 point): When a Touchdown is made the tossing team is given an extra point attempt, all remaining footballs or at least 1 football is given to attempt the extra point.
-First Down: When you land a football with two marks in the 1st down spot then the team receives all the footballs back to again attempt to score.
-Interception: If a football lands with two marks in the white “I” spot then the team loses any remaining throws and the footballs are given to the opposing player.
-First team to 33 wins the game.
Simplified rules: Score a TD for 2 points, field goal is 1 point, no extra points and the Interceptions and First Downs still apply. These simplified rules can come in handy if you’ve been tailgating for a while and begin to struggle with math:)
In playing the MiniToss game the first thing I thought was that the field game board looks amazing. After I got over that I started tossing some footballs and hearing the clang of the metal footballs hitting the pavement. These don’t just stick when you throw them and they could bounce off.  You’ll find your stroke as you play on and it allows you to be the QB of your team on game day.

My feedback for this game would be to open the end zone up and remove the Interception and First Down from being in the end zone and place them in the red zone. This would give more scoring opportunities and make use of the green space on the board that has some consequence when someone doesn’t get the ball in the end zone area.
Overall, this is a beautiful game that takes the classic game of washers and makes it perfect for some tailgating before the big football game.