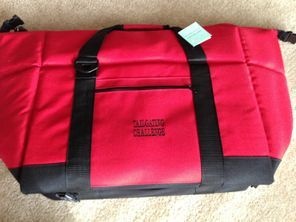 The coolers are made out of a heavy duty nylon outer shell and it does not disappoint!  The material just feels tough and that’s something I like. I have taken this cooler on multiple trips and been kind of rough with it but, you could never tell as there is not a single mark on the outside of the cooler.  They claim that the cooler is both leak and sweat proof so, of course I had to put it to the test.  I filled up the cooler with boiling water and let in sit in the cooler for 3 hours.  The cooler was not leaking or sweating on the outside and when opened I was hit with a burst steam and the water was still very hot.  The boiling water didn’t harm the inside of the cooler in any way!

Lets be honest, handling boiling water is pretty cool but, the general masses use coolers to keep things cold. Polar Bear Coolers claim that their cooler will keep ice for at least 24 hours in 100 degree heat.  Again, I had to test this for myself.  I took a gallon jug filled with water and froze it solid.  I then placed only this into the cooler zipped it up and waited. 24 hours later the jug was still almost solid ice. I left it in the cooler and zipped it back up. After 36 hours I checked again and this time the jug was about half frozen. This was done in 70 degree temperature that was held constant.  I have no doubt that a cooler full of ice would have no problem staying cold for 24 hours or longer, even in extreme heat.

>What makes the cooler perform like this is the Dura-Temp Liner that has a 5 layer air trap design to help keep cold things cold and hot things hot.  This liner is also puncture resistant and will not mold or mildew. Anyone who has allergies can rejoice at the last line, I know I did.  This liner can also be pulled out to be cleaned with soap and water to keep your cooler looking fresh and clean.

These coolers come in a 6 pack, 12 pack, 24 pack, 48 pack and backpack models.  You can get a variety of colors but, the coolest part is they can customize your cooler for you.  They can put your logo, name, or almost anything you can think up on the side of your cooler to give it that ME feeling that many of us love.  Another feel good part of these coolers is the built in bottle opener that is attached to the zipper, genius!

There is much to love about these coolers but, as with all things in life they are not perfect.  The cooler I tried out (48 pack model) is the largest of all of their coolers and when full can be handful for some people and hard to get around.  The cooler does come with a shoulder strap that definitely helps to ‘shoulder’ the burden but, when you are carrying a serious amount of drinks be ready for a work out.  The smaller versions obviously do not have this issue as they can not hold the large volume of contents that the 48 pack cooler can handle. The only other issue I had with this product is an issue, I have to admit, that I brought upon myself.  I loaded the cooler up and I do mean LOADED the cooler up for a trip that I went on.  I’m a very rough person when it comes to handling products so, I pulled hard on the zipper to force the cooler to close and the bottle opener popped off the zipper.  The bottle opener didn’t break but, the ring it was on did.  Again, I was pushing the cooler to the max and I was intent on making it zip up regardless of the consequences.  I let the kind folks at Polar Bear Coolers know this and even though it was my fault they advised would be happy to send a new bottle opener to me free of charge.  I received the new bottle opener in a just 3 days and they upgraded the metal ring to a much more durable link that even I can not break!

CONS: the largest cooler can be hard for some to manage

Recommendation: This is an amazing cooler and an amazing company who will bend over backwards to make sure you are satisfied with your purchase.I would recommend this product to anyone in the market for a new cooling device.
Check them out at: 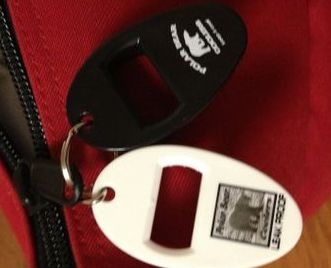 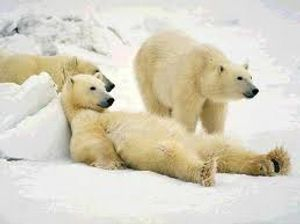