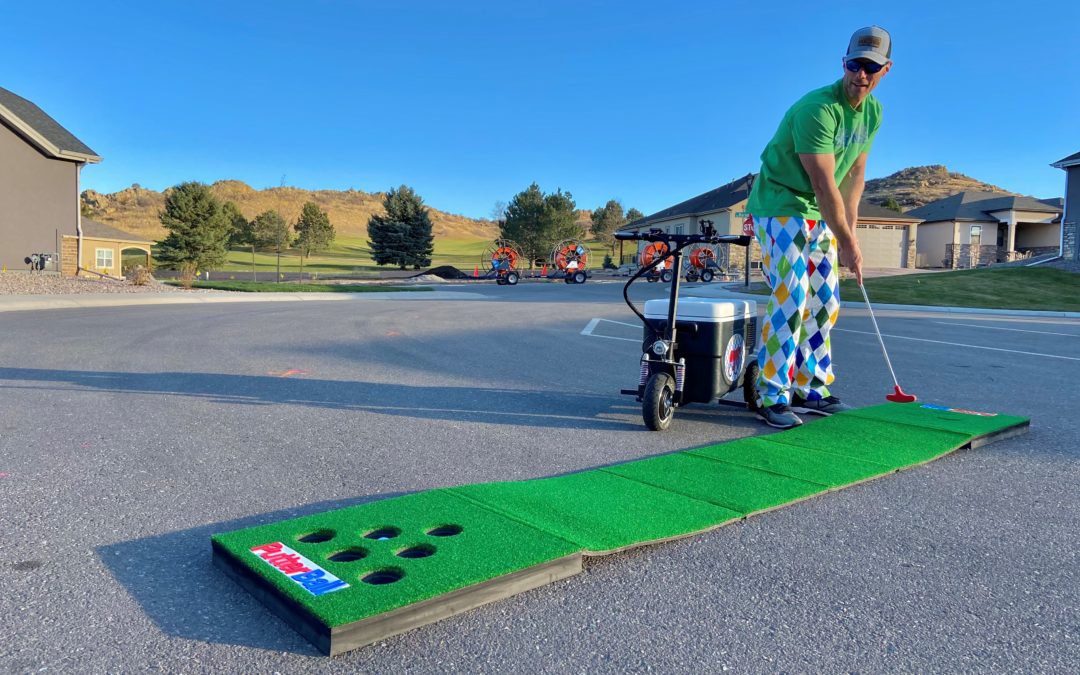 We love to test out new tailgating games. We see how they play, both in a tailgating environment and if they are suitable for playing indoors. The ability to play both inside and outdoors is a major win when grading any new game we receive. One of the new games we got in recently was Putterball. This is a golf inspired game that can appeal to far more than just golfers.

I’ll start by sharing that I am not a golfer. I never have been and I never will be. Golf is not a sport for me. When I first saw this game, at first I was thinking that if I don’t like golf then why bother with this game. I’ve test some other golfing outdoor games and wasn’t a huge fan. As with everything in life I’ve learned that I need to be open minded, since I’ve been surprised before. Spoiler Alert: I was surprised again.

PutterBall is an all encompassing putting green that has 6 holes on each side that you have to fill before your opponent. You fill each hole, by putting one of the two included golf balls into the hole. The game also comes with two putters, so don’t panic if you don’t have these at your house.

The PutterBall boards are made of high-density, durable foam, making it perfect for all settings, and the ultra-light design makes this the ideal game to take with you wherever you go.

As noted, the game comes with everything you need to start playing right out of the box.

Here are the rules courtesy of the PutterBall Website:

Teams: A standard game of Putterball is played by two teams with two players on each team.

Honors: To determine which team takes the first turn, also known as “honors” in the golf world, it’s simple: ladies first. In the event there are no ladies present, you can use a simple coin flip, or a classic duel of Rock, Paper, Scissors (best two out of three, obviously).

Turns: Teams then take turns trying to make cups, with each player hitting one putt per turn. Each player gets one attempt per turn to try to make a putt, and must hit the ball from a maximum of one foot in front of their own cups. Once a cup is made, place a cover over the hole to remove it from play. The cover should fit securely so that a putt can roll over the spot without bouncing or deflecting.

Redemption: Once a team has successfully made all six cups, the opposing team is given a chance at redemption. For example, Team A is the first team to make all six cups. Each player on Team B will then get one attempt to make as many cups as possible until they miss. If both players on Team B are unable to make all of the remaining cups, Team A wins the game. If Team B is able to make all of the remaining cups, the game will be decided in overtime.

Overtime: The rules of overtime are the same as the original rules (one putt per player, per turn) but only the back three cups are uncovered. In the example above, Team A would have “honors” in overtime, since they were the first team to make all six cups in the original game. Overtime is played as sudden-death: the first team to make all three back cups wins the game. Sorry, no second chance at redemption — it’s time to let someone else play.

When I first started playing I kind of sucked. I was putting too soft, or too hard and was becoming a little frustrated. I thought this game would fall into the category of some of the other golf related games that I’ve played in the past. The friends I was playing with continued to play and have a great time, so of course I kept on pushing. Then it happened, I started to find my groove and we played in my basement for hours the first night we got the game in.

This is the beauty of this game, as it can be played inside, or outdoors. There are some games that aren’t conducive to playing indoors, but in reality I will play this game more inside than I likely will outdoors.

As I continued to play I knew it was time for some trick shots. This game sets up well for some fun trick shots and you can see our attempts in the video below. Let us know what trick shot you’d like to see, or have successfully completed!

PROS: fun game that can be addicting, play indoors or outdoors, great for trick shots, heck you can even work on your putting

CONS: the one thing I’d like to see is a clip/clasp that will keep the game together when transporting it

Overall, this game surprised me with how much fun we had while playing. It could just surprise you too.

Learn more and get your own PutterBall by visiting PUTTERBALL.

Love learning about all the fun, new products that we get test out? Take a minute and check out some of the recent Product Reviews that we completed.

We NEVER get paid to complete a review. This is a conflict of interest and results in less than honest reviews. You deserve better than that. We were sent one sample unit to test out with the understanding that we’d give our truthful thoughts.