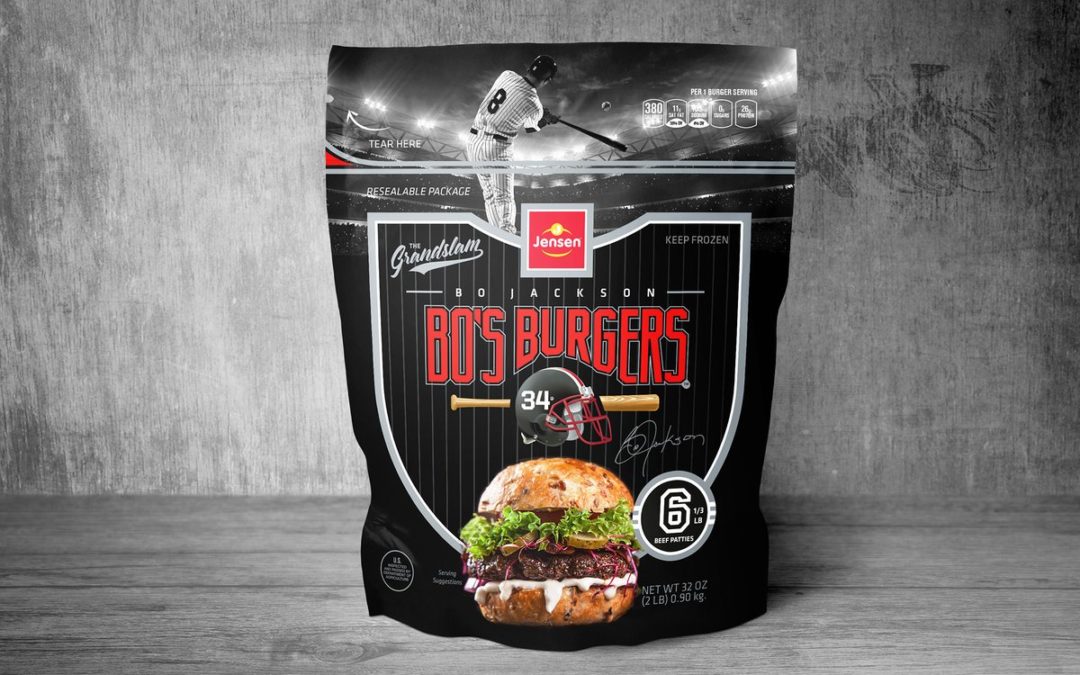 I loved watching Bo Jackson as I grew up. The guy was unreal, super human if you will. The plays he made on both the baseball and football fields will live in the record books.  There were few to ever do it like him on the field, but how would he fare on the grill? Bo accomplished a lot and is now getting into something we can continue to support: BURGERS! BO JACKSON’S BURGERS. We need to KNOW if Bo’s Burgers are as good as his game was on the field. Let’s fire up the grill and find out.

We got a six pack of Bo’s Angus Beef Burgers (aka the Grandslam) and fired the grill up. While we wait for the grill to heat up let’s take a look at what’s in these burgers:

Nutrition Facts (do people that eat burgers ever look at these?)

We got our grill to a medium heat and slid the frozen burgers on the grill (no need to let them unthaw) and let them cook about 5 minutes on each side until they got those grill marks that let you know its almost game time!

Bo’s Burgers cooked like most frozen burger patties and they started to bleed midway through the cooking process. Once the burgers were almost done, we put a slice of cheese on them to get the proper ‘melt’ to the cheese before it hit the buns.

Speaking of buns let’s talk about Bo’s Buns. Not those buns! The Pina Colada Brioche Buns are also part of the new Bo Jackson Signature Food lineup. I had never heard of a Pina Colada bun, but it did sound good. Of course we got the six pack of these buns to match up perfectly with the sixer of the burgers that we had on the grill.  Side note, we placed the buns on the upper grill grate, away from the direct flame, to warm the bun up prior to consumption.

We built the burger with ketchup, mustard, dill picks, and leaf lettuce. It looks great, but looks don’t mean much when the food hits the mouth. I took a big bite and the different flavors starting swirling around my mind; from grilled angus beef, salty cheese, tangy mustard, sour pickles and then the SWEET bun! I’m going to say it:     Bo has some sweet buns! I mean these buns compliment the burger in a way that I have not experienced before. Pina Colada buns = WINNING!

I served these burgers up to my esteemed taste testing team, ie: my friends, and asked them to finish the burger before sharing their thoughts. Everyone was impressed that these were frozen burgers! I will say I do NOT buy frozen burgers, as historically, I have not been a fan, but these have changed my mind. The taste testing crew also confirmed that Bo has some tasty buns! They concluded by asking if they could buy these at the local grocery store, so I pulled up the store locator to check and see. Unfortunately, these were not available in our local area, but I shared that we could order some more, as they will ship directly to you house.

Overall, I came away more impressed than what I thought I would with a frozen burger. I would highly recommend that you combine Bo’s Burgers with Bo Jackson’s Pina Colada Brioche Buns too. You will thank me later.

“I became a food connoisseur at the tender age of 5, while watching my mother cook for my nine siblings day in and out! Over the years, I acquired a passion for preparing great tasting food in the kitchen; now that I am out of the world of sports that is what I do best. I want everyone who enjoys cooking as much as I do to experience the quality of Bo Jackson’s Signature Foods. From my table to yours. “

Want to learn more and get your own? Check out: https://bojacksonsignaturefoods.com/

Did you enjoy this NON biased review? Check out all of our fun and honest reviews HERE

This was a NON paid review, as we want to bring you the truth, not what someone pays us to say. We were supplied a six pack of burgers with the understanding that we would give our honest review.