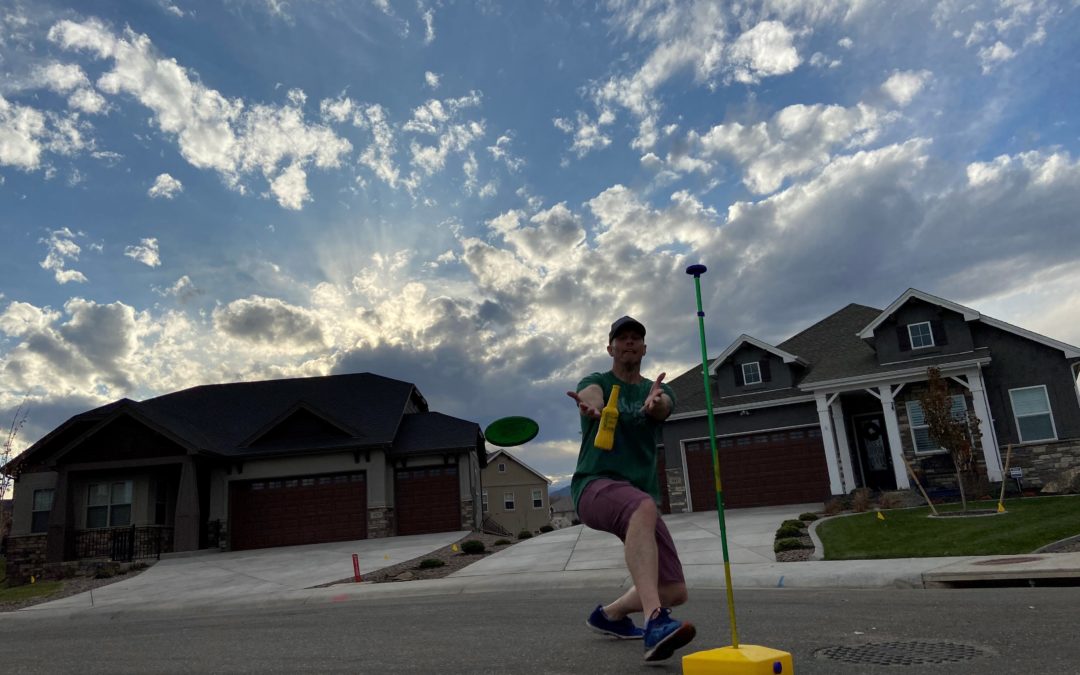 I’m a sucker for a frisbee game, so when I learned about a tailgating game involving a frisbee I knew I had to play. In this review we check out the fun new Bottle Bash game that is sure to be a hit at your next tailgating party.

Bottle Bash is a game where you are trying to knock the bottle off the stand with a frisbee. The defender is attempting to catch BOTH the frisbee and the bottle if it is knocked off. The frisbee is worth 1 point and the bottle is worth 2 points if they fall, then points for the offense. If they are caught the points go to the defender. Let’s take a look at the set up and rules.

(1) Find a flat surface and place both poles at a distance of 20, 30, or 40 feet apart depending on skill level and age.

(2) Place the bottles on top of the poles.

(4) Each team chooses a pole to defend and stand behind. Team members will stand behind the same pole.

(5) Players must stay behind their designated pole both while throwing and catching.

(1) Disc must be considered “catchable”. This means that the disc is not thrown too far to the left or right of the players or too high based on their, age, skill level, and capability.

(2) The “Low Disc Zone” marked on the bottom of your pole indicates where the disc no longer counts for points. If the disc is below this line on a throw or landed before reaching the pole, points are not awarded to the offensive team.

(3) If the disc is low, but hits the pole, the Bottle is Always Live! This means that although you and your team mate do not have to worry about the disc, you still have to catch the bottle.

(4) No guarding. The disc cannot be stopped before hitting your pole or bottle.

With the Bottle Bash game it comes with a spike to place right into the ground, but there is an issue if you’re tailgating in a parking lot. No sooner did I share this concern, when I was advised there is a base that can be purchased too. This base will allow you to play on any hard surface, just fill it up with water, or sand. We played a few rounds with nothing in the base, but you can see in the video it kept getting knocked over, so we eventually put water in there. Water seems so much easier than sand to use in a base like this.

We took this game to the top of a mountain to play with the spike on the bottom. The set up is simple, the poles pull out and snap into place. Then you insert the spike (or base filled with water) on the bottom. On the top you’ll see the built in scoreboard and right above that you will put on the top in which the bottle will sit.

The bottle itself as a little weight to it. More than I anticipated when we got the game in. Once we got it set up it was time to let the frisbees fly. I’ve played other frisbee style tailgating games and this one brings a different challenge as you’re trying to focus on catching both the bottle and the frisbee. Your attention goes to the bottle, as it’s worth more points, but when you do this you could lose track of the frisbee (see the video where one of our friends got popped in the mouth by the frisbee). The ability to think and track both objects is an art form. One that I’m still working on.

My mission was all about the bottle and trying to catch the bottle before it hit the ground. In playing this game for a few hours we had many frisbees caught, multiple bottles caught, but we did not complete the combo with catching both of them. Of course this means that we will be playing some more to make this happen, as we can’t back down from a CHALLENGE. Stay tuned for that fun, short video we when complete our Bottle Bash quest.

There was another bonus that we got to test out too, this can be played at night! While not included in the standard purchase, you can also order the USA LED “Get Lit” accessory so you can play at night. You will receive a USA themed frisbee and two bottles. Both of which will light up with three options: Fast blink, slow blink and no blinking LED lights. This allowed us to play Bottle Bash into the night.

Overall I am a fan of Bottle Bash. This game is challenging, but also really fun. Again, I’m a sucker for frisbee games and we will be playing Bottle Bash more in the future, day or night.

Learn more and get your own game by visiting BOTTLE BASH.

Love learning about all the cool, new products we get to test out? Take a minute and check out some of our recent PRODUCT REVIEWS.

We never get paid to give our opinion about a product. This way you can trust our reviews are REAL. We were sent one sample game to test out with the understanding we’d give our honest opinions.