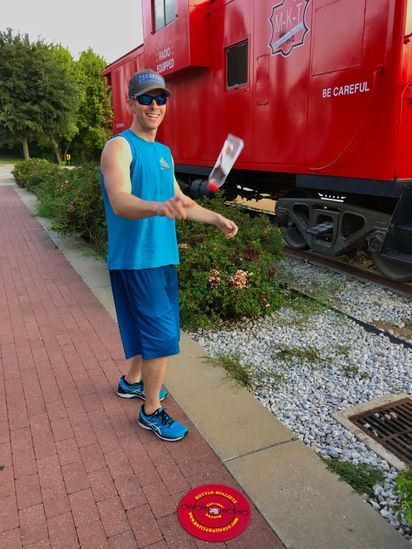 Water is critical at the tailgate, as you must stay hydrated. After a while those water bottles can pile up and somewhere along the way someone started taking these water bottles and flipping them to see if they could get them to land upright. The bottle flip phenomenon took over the nation, but the team at Bottle Bullseye took it a step further. Not only do you need to get the bottle to land upright, but also land it on a scoring target.

The Bottle Bullseye comes with a target, two large water bottles, branding stickers (for the water bottles), and even tuning bottles to help fill up your water bottles with precision. Simple enough, so now time to start bottle flipping!

You can set the total amount of points to win at the onset of the game with the classic amount for most games is 21. You can then play one on one, or with a team to help get to the point total. One on one is fun, but I still prefer the teamwork with a two on two matchup.

This is a fun game that can be frustrating at times, but you want to keep playing. Many players played and you could see them work hard to perfect their game, as they thought it was going to be easy and then it was more challenging that anticipated.

If you’re ready to play the best Flippin’ game ever then it’s time to check out the Bottle Bullseye. Put those water bottles to use!
VISIT BOTTLE BULLSEYE