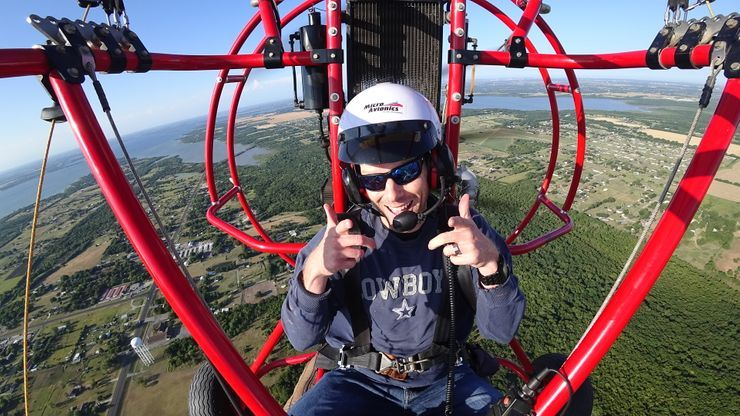 I love adventure and pretty much anything that gets me to a higher elevation. I’ve jumped out of planes, done hang gliding and other fun activities, but recently did something that you don’t hear as much about: Powered Parachute Gliding. I visited Future Flight in Princeton, TX and went up in their fun and very open glider machine they have to take in a different view of the Dallas landscape.

I arrived at 8:00am on 7/31/18 to small air field near Lake Lavon. The temperatures were set to get into the low 100’s later in the day, but it was nice with the breeze picking up. I was greeted by David in a golf cart who turned the golf cart keys over to me and advised me where to meet up on the air strip. He went bring out our flying machine and what a machine it was. It’s a wide open two seater machine with some tublar frame bars and the ability to be one with nature, as there are no doors or anything to stop that FREE feeling.

I drove the golf cart over as he is getting set up and ask if there is anything I can do to help. He states he just about had everything done. Also note he has been doing this since 1984, so yeah he’s pretty good at what he does. He stated we would go up about 1,000 feet today and cruise around to see what was going on. He hands me a sweatshirt and tells me that you may want to put this on. Hard to fathom in a brutal Texas summer that a sweatshirt would be needed, but hey he’s the expert (it was cooler the higher we went).

He finishes set up and I climb in the back seat ready to take off and get the adventure I need to quiet the internal roar for more fun I had been having recently. He gives me some head phones and a mic, so we can talk during the flight. On top of that we put on a helmet for safety purposes. Then it was time to fire up the engines and take off. I sat in the back gripping the red tublar frame bars in front of me for what was to come.

We started to take off down the runway and then there is a slight pause as the parachute starts to inflate with air. Once the ‘chute was up we propelled off the ground and into the sky above. The wind had started picking up and it was a little choppy at the lower elevations. We went up to 1,500 feet to get out of the wind and then had a very peaceful ride.

We went over Lake Lavon and learned that the reason there were no houses on the lake was because the lake is owned by the government to supply water to Dallas and the surrounding areas. With droughts the lake could get low and therefore no houses were to be built on it. I then saw something different in a neighborhood up ahead. There was an actual canal system built throughout the neighborhood so everyone could have a dock and water, but this was not connected to the lake. I learned that this was a ski community, so the people could walk out their backdoor and then waterski whenever they like!

We continued the therapuetic tour for about 30 minutes and he even gave me control over the steering for a few minutes. I was told there isn’t anything you can do that would hurt us, good to know! The steering is done with your feet and you push the lever on the right to go right and vice versa for left. I played with it for a few minutes and then he said we can cut the engine and ‘free fall’ back down. Sounds scary right?

Once the engine was off we literally drifted in a peaceful and quiet manner closer to the earthy below. He then fired up the engine and took us back up to circle and position for landing. We came in for a landing and it was extremely smooth and we stopped almost on a dime.

I got off wishing I could stay up there for hours, but my time had come and it was back to reality. This was an amazing ride and the only thing that could make it better would be if there were two seats in the back, so you and a friend could experience this at the same time.

Check out the video below to visualize the experience and let me know if you would try it!