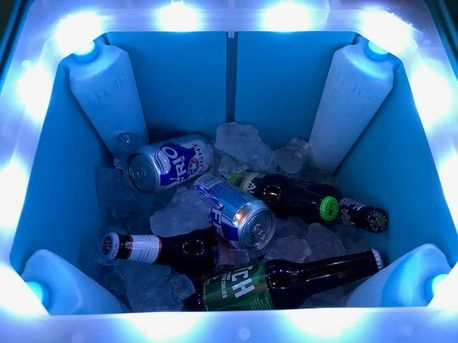 Coolers coolers coolers everywhere! That is what the average consumer likely sees when they are in the market to purchase a new cooler. There are literally so many options it can be overwhelming. In today’s world coolers do more than just keep drinks cold and today we are checking out Lit Coolers. The name alone can likely help you deduce what their unique feature is…the coolers light up (aka LIT).
The Lit Cooler gets it name from the Night Sight LED liner that wraps around the entire inside of the cooler. When the cooler is opened, presto, let there be light as the bright LED lights easily light up the darkest night for you to be able to see exactly what drink you want to pull from the ice cold depths. There is also a clear logo plate on the lid that you can customize to have your team or business logo GLOW when you close the cooler.
Ok, so we know the light up feature is awesome and its the brightest light I’ve ever seen in a cooler, but lets talk about the cooling power of the Lit Cooler. The Lit Cooler comes 22, 32 and 52 quart designs and also have removeable frozen ice legs that you freeze and insert to help rely less on ice. In the test I completed I placed the frozen ice legs in the cooler along with a 10 pounds of ice. This amount of ice filled the cooler up not quite halfway. I wanted to see how well the ice legs would help enhance the ice, even if the cooler was not filled to the top with ice. I had another project (beer brewing) that I needed ice for 3 days later and the Lit Cooler helped me out big time as the ice was still there and could use it for brewing after 72 hours. Based on this it would have kept the contents cold over 5 days and more if loaded to the brim with ice.

PROS: keeps ice for days, removeable ice legs so you need less ice, custom logo plates, the brightest light I’ve seen in a cooler to date.
CONS: There is an on/off switch on the Night Sight LED light, but it would be cool if it was activiated by level of darkness and only cut on when its getting dark.

If you want to light up the night and do it in style then it is time for a LIT COOLER!
Order your own here:
www.litcoolers.com