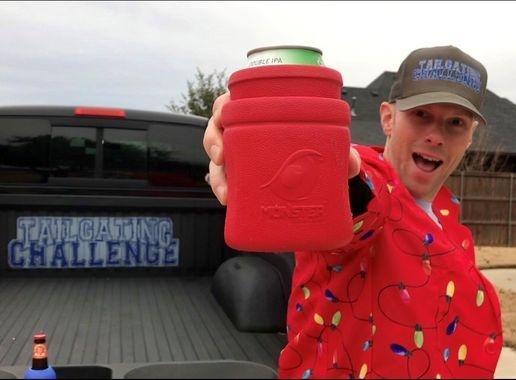 If you’re like me then you love koozies. I have tons of them and one of the downfalls with some koozies is that they are built for either cans, or bottles. There are few that work well with both. That’s why when I saw the
Monster Cooler Koozie I knew I had to put it to the test.

The Monster Cooler Koozie is a transforming koozie that is ready to handle cans, or bottles with ease.
Let’s look at some of the features of these Monster Cooler Koozies:
-Patriotic colors: Red, White and Blue
-They float on top of the water (do not attempt if your beer is open)
-good insulation
-exterior has good grip
-transforms easily to fit standard cans and bottles.

In testing the Monster Cooler Koozie we were surprised at how good they felt in hand. The non-slip material feels good in your hand and will limit any potential party fouls with dropping your beer. The Monster Cooler is two pieces and the one piece simply flips over to house cans, or slides over the top of bottles (see the video below to learn more).

The Monster Cooler keeps your drinks colder for both cans and bottles because:
-Cans get double insulation as you flip the Monster Cooler over to have two layers of insulation between your beer and the warm environment that surrounds it.
-Bottles get fully housed by insulation and don’t leave a large portion of the bottle in the open elements, like other koozies.

If you’re like me and love to try a variety of beers then having a koozie that will quickly transform to whatever you’re drinking is key. Check out the Monster Cooler Koozie if you need to transform your koozie collection.

GET YOUR MONSTER COOLER HERE