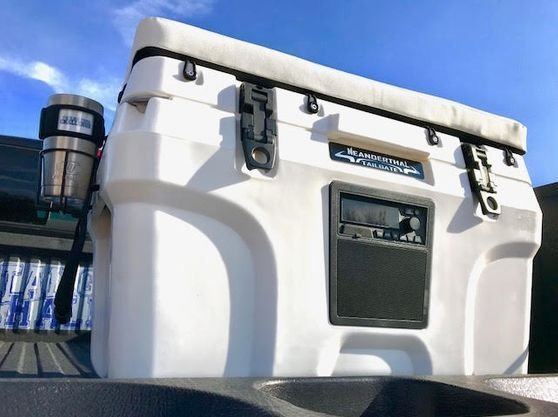 We all need a cooler and there are plenty to choose from out there. I’ve had the opportunity to review many coolers and have learned that, in reality, many are pretty much the same. I love a cooler that can do more than just keep drinks cold, which is why I’m a big fan of the new Neanderthal Nomad Cooler.

The Neanderthal Nomad Cooler is a beast of a cooler and can hold up to 72 cans! It has 3.5 inch insulation on the sides and claims it can keep ice for up to 7 days. This cooler also has a built in bottle opener, seat cushion on the top of the cooler, LED lights, a 20 watt bluetooth stereo, phone charging ability, and more. This cooler comes loaded with features for under $300 (as of 5/12/18 pricing subject to change).

I see all this and I think I have to try this cooler out, as this sounds like it could be the perfect cooler for tailgating and camping. I get the all white edition, it also comes in camo, and my first thought is that this thing is a beast. It looks rugged and I LOVE the padded seat that is attached to the cooler top. Cooler tops are always used as another seat and now it can actually be comfortable. The seat is detachable so you can remove it and it also comes in white or tan colors.

As I look into the cooler further I see the stereo system on the front center of the cooler. It is a pretty simple set up that tells you the volume level on the digital screen and thats about it. It is a 20 watt sound system that is bluetooth enabled, so you can play music off your phone. The stereo is adequate and great to have, but I’d like to see it with just a little more power.

In speaking of the electronics there is also a USB hook up so you can power your phone up. That is a handy feature when you’re away from your house, but also know it will take battery away from the stereo system, so it’s a balance between charging your phone and rocking out to your tunes.

Next up, let’s check out the lights in the cooler. the inside of the cooler has two LED lights that will light up the contents of the cooler at night. This makes it super easy to find the right drink to pull out, after the sun goes down. Not only does this cooler have interior lights, but there are also lights on the underside of the cooler too. The cooler comes with a remote control that can control the exterior lights and allow it to change from red, green and blue. If it is dark outside you can also find where your cooler is by having these lights on. These are both pretty cool features and the exterior lights are something that I have yet to see on another cooler.

We know this cooler has a bunch of other cool features, but how does it perform as an actual cooler? First off lets talk about the weight of the cooler. Dry Weight is 35 pounds and when you fill it up with ice and drinks it becomes pretty dang heavy. I’m a decently strong guy and it was still a strain to move it by myself, when fully loaded. I’d recommend a buddy system, or the optional roll cage wheel kit. I did not have the this roll cage wheel kit,but it looks pretty sweet and given how heavy this cooler can get it’s likely a good option to invest in.

PROS: LED lights on inside and outside, stereo system, ability to charge a phone, keeps contents cold for 7 days, seat cushion on top
CONS: stereo could be louder and cooler is heavy when fully loaded (group lift or optional roll cage wheel kit recommended)

Overall, this cooler is pretty dang close to perfect in my opinion. I love the looks, how it performs and all of the options that come loaded in this cooler. If you’re ready to take a step up from the basic roto molded cooler, then its time for the Neanderthal Nomad Cooler!

Check out the Cooler made for tailgating here: