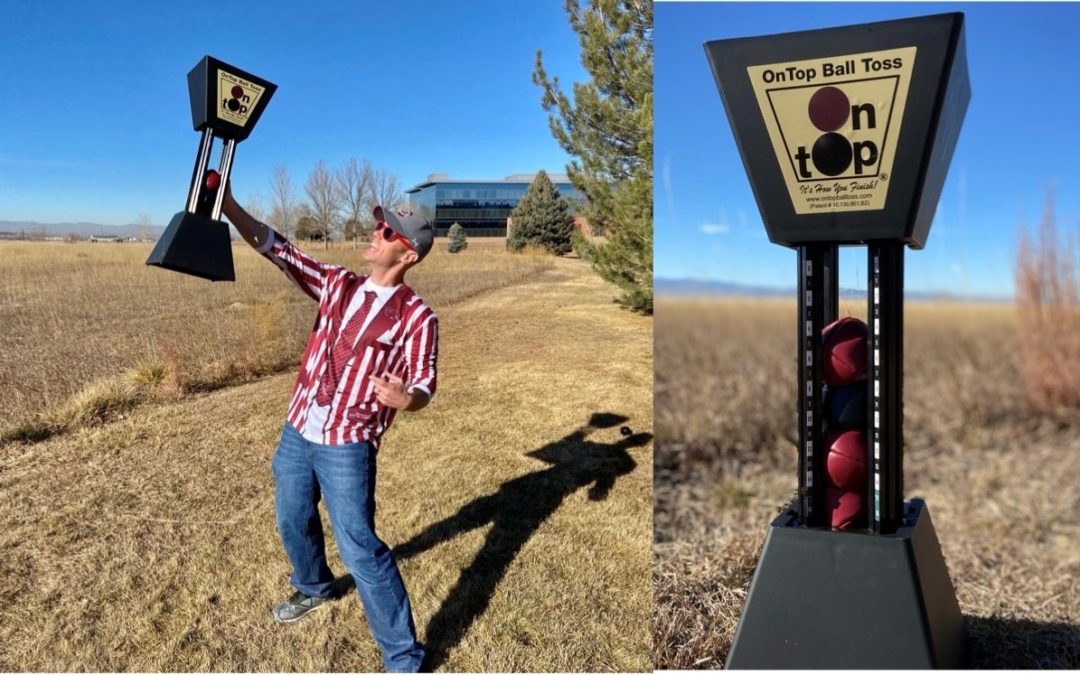 We love playing yard games. It doesn’t matter what the game is we want to try it out. In checking out the OnTop Ball Toss game we learned that it’s all about how you FINISH the game. Let’s see exactly what that means in our OnTop Ball Toss Review.

OnTop Ball Toss is the next game that will test your tossing skills. You are trying to toss the hacky sack style balls into the open mouth of the game tube. If the ball goes in then it falls to the bottom, but don’t celebrate just yet. Remember it’s how you finish, so if your opponent makes their ball on top of yours then you get no points.

-A flip of a coin decides who starts the match (loser starts).

-Points are awarded, at the end of each round, to ONLY the player OnTop.

-The Official distance between game units is 15 feet. Place towers with logo’s facing each other. (This distance can be modified based on skill level of participants in friendly competition, such as 10-12 feet)

-The Official throw line is an imaginary line that runs along the front of the base.

-Team’s alternate tosses until all balls are tossed. The team OnTop at the end of the round, starts the next round (or half round). If no one was OnTop, the last team OnTop goes first.

-Balls are released from the tower by pulling the ball stop at the base of the tower, or guiding the balls up through the tower and out the top (never pull balls through bars, as it shortens there life).

-When a player/team exceeds 16 points it is called a “Screamer” (or Bust). With a Screamer, neither team is awarded points, and the Screamer team tosses first in the next round. When playing “Error to The Thrown” Method of Play, missed tosses do not count towards the +1 Rule.

One of the things that took me a little while to understand, while we were completing the OnTop Ball Toss review, was the scoring of this game. I knew that who finished on top would be the one that gets the points, but when does the round stop and you calculate score? Remember that this scoring happens each round (so after each player tosses all 3 sacks you can add up the points). There is a built in scoreboard on the game that can help you keep track of the score of each game. This is a great feature if you don’t have a stand alone scoreboard.

Once I got my head wrapped around the scoring it was time to get our toss on! I started playing OnTop Ball Toss both inside and outside. One of the key attributes of a great game is the ability to play anywhere and this game meets the mark. I can also toss the game into my trunk and it is easily portable.

The biggest thing that we all want to know about a game: IS IT FUN? We’ve tested numerous games and some we play a few times and then end up in the basement collecting dust, while others are more addicting that find a way to pop up at our parties. OnTop Ball Toss is one that I’ve found myself playing on a regular basis. I like to even play by myself and toss a few balls to decompress and sharpen my skills. This game is one that is fun to play the traditional way or you can find new ways to continue to bring the fun (we show you a couple of new ways that we found to play this game, along with trick shots in the video below.)

We got our crew together, split up into teams and then we let the balls fly in a competitive game of OnTop Ball Toss. Everyone had a blast. It had the right amount of challenge, fun, competitiveness, and the unique aspect of it coming down to the last throw, every round. In touching base with the players everyone had positive things to share about the game and asked that I bring it out for another fun game in the future.

PROS: fun, portable, built in scoreboard, a game that you will continue to enjoy over time

CONS: One thing to remember is that you should not pull the sacs through the side or they could wear out and break. This is more of a reminder, but if not adhered to you will need to get some new sacs.

Overall, OnTop Ball Toss was one of the most fun games that we got to test out this year. I come up with a new trick shot or way to play each time we bring the game out. Now it’s your turn. Check out OnTop Ball Toss and tag us in your videos playing this soon to be well-known game.

Learn more and get your own game by visiting OnTop Ball Toss.

Did you enjoy the OnTop Ball Toss Review? Do you love learning about all the cool, new products that we get test out? Take a minute and check out some of our latest PRODUCT REVIEWS.

We NEVER get paid for our reviews, so you can trust that what we share is our true opinion. We were sent one game to test with the understanding that we will give our honest thoughts.