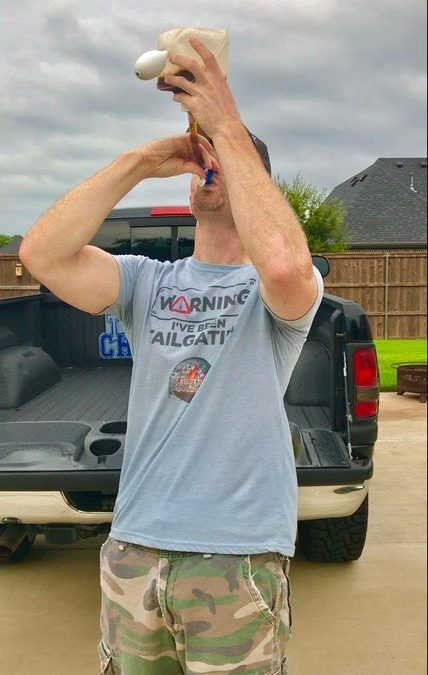 One of the original sports in tailgating is starting the day off with a funneling a beer aka Beer Bong. The Beer Bong is a fast way to get a beer, or two, into your system to get the party started right!

The Q Bong is a compact, portable beer bong that can hold up to two full beers, but it’s different than most beer bongs as it is pressurized. That’s right, now you can make the beer flow even faster into your mouth! There is a pump on the Q Bong that allows you to put air into the space not filled with beer to help force the beer out faster when you unlease the liquid beverage refreshment. You can pump it a few times to about 20 times to step up the speed of the beer flow.

In full honesty, as I note in the video below, I never successfully completed a beer bong when I was younger. Whenever the beer was released I wasn’t able to keep up and ended up wasting some of the precious contents of the beer bong. When I got the Q Bong in I knew that I had to give it my best shot, for the people to be educated of course!

I filled the Q Bong up with a Porter beer vs the standard light beer that the majority use in their beer bongs, because hey I’m a different type of guy. I then did a few pumps to pressurize the contents and gave it my best shot, in one take.

Watch the video below to see the Q Bong in action and how I did on attempting to complete my first ever beer bong.

PROS: pressurized beer bong to adjust how fast you want the beer to come out, portable and easy to carry, has a good on/off switch instead of having to crimp the hose when starting to beer bong.
CONS: I’ve had zero issues so far and like this beer bong way more than any of the giant funnels that were around when I was younger.
Overall, if you and your friends enjoy a good beer bong to start the tailgate off then the Q Bong may be for you.

Step your beer bong game up and order yours HERE

*The Reviews expressed here are my opinion only. Please remember to drink responsibly and NEVER drink and drive.