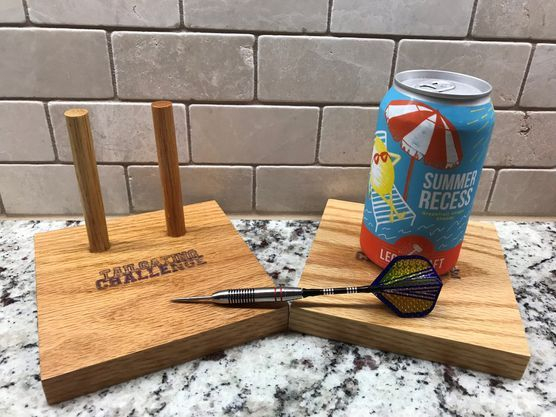 The team at Tailgate Darts reached out to me as they knew their Tailgate Darts game is a game that tailgaters would love. They even asked us to send over our logo, so they could customize these boards for us. On a side note I love things that can be customized, don’t you? I got the box of Tailgate Darts in and opened it up and thought, these is the most portable beer darts game that I’ve tested so far. Other beer darts games have far more bulk to them, but these Tailgate Darts are just the amount of board you need, nothing more, nothing less.

The boards are a small square piece of wood (that had our Tailgating Challenge logo on) with two posts behind it. The beer will sit on the board with the two posts to the beers back. These posts will hold the beer up when the game starts and the darts start to fly.

Speaking of darts, I should say dart, as the game comes with one dart. This again keeps the game simple and less parts to keep up with. Would be nice if there was a clip on the board to hold the dart once the game is over.

I placed a beer on the board and then started tossing darts (watch the video below) to see what would happen when the beer was hit. I’m always sensitive to wasting beer and want to see how this one did. You can see upon impact some beer was released, but the can fell perfectly, so excess beer didn’t spill. If the can would have fallen the other way it could have been a different story.

You can set the rules and distance you feel most comfortable with and of course once the beer is hit then it’s time to drink it!

CONS: Would be nice to have something on the board that would hold the dart when done with game.

Overall, there is something satisfying when the dart hits the beer can. It’s hard to explain until you do it yourself, but I bet once you hit the can you’re going to want to hit it again and again.