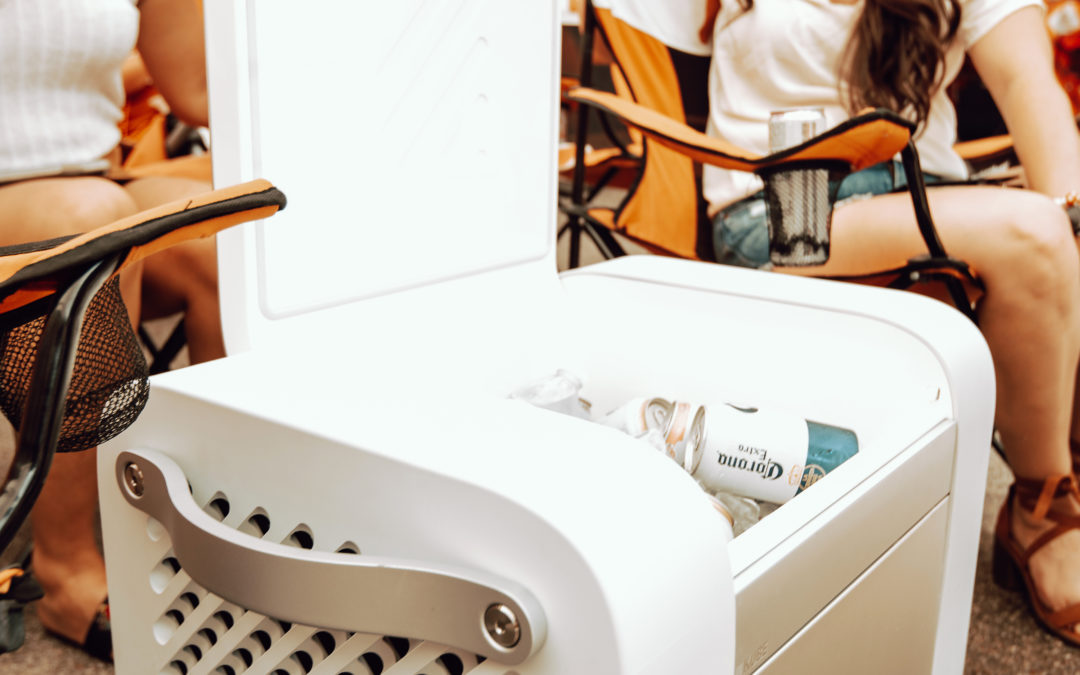 I’ve tested some of the most amazing coolers that you’ve ever seen. It takes a lot for a new cooler to WOW me, but the Kube Sound Cooler did just that and I’m here today to show you why in our Kube Sound Cooler Review.

*See some of our coolest coolers we’ve tested HERE

I came across the Kube Sound Cooler on Facebook and I immediately stopped scrolling to see what this cooler was all about. The Kube Sound Cooler looks like the ultimate futuristic cooler that can really bring the party wherever you take it. The styling of the Kube Sound Cooler is super clean. It ALMOST looks too nice to use, almost. I reached out the Kube team and we arranged getting one out to Tailgating Challenge so we could put it to the test, because hey we’ve tested quite a few coolers and know if the cooler will be a winner.

The cooler came in and the first thing I noticed was that the box was heavy! This is one of the drawbacks to this elegant cooler, the weight. It weighs over 45 pounds when fully UNloaded. When you load this up with ice and drinks you better use the group carry method, or prepare for a great workout! The Kube Cooler weighs a little more because it packs an awesome line up of features:

1 touch opening (this may be my favorite feature)

After getting the cooler out of the box I charged the battery, so it would be ready to rock. While it was charging I installed the two handles. The handles are rugged and there is nothing about this cooler that feels, or looks cheap. Once we were fully charged I loaded it with some ice and drinks and took it over to a local homegating party.

When testing out a cooler with a stereo, of course that is the first thing that I needed to test out:) I paired my phone with the cooler (hook up your phone by pressing the wifi button on the cooler and looking for Kube on the Bluetooth devices) and then it was time to rock. I slowly raised the volume and it was getting to a level I have not heard from other stereo coolers. The sound system in this thing will ROCK the party. The sound system takes up a some space on both sides and obviously adds to the weight to the cooler, but when you hear the quality of sound you’ll be like me and say “It’s worth it.” This is great at the beach, or pool party too as it can get splashed with water and the speakers keep pumping out tunes!

Lets move on to the features about the cooling aspect of the Kube Sound Cooler. The first thing you notice with the clean style of this cooler is that you don’t see latches like pretty much all other coolers have. You may stare at the cooler and say is there a remote that opens this cooler up (future idea that you heard here first:))? You’ll notice the rectangular panel on the front of the cooler and if you press that panel it automatically raises the lid and activates the LED lights inside of the cooler. This feature may be my favorite. Now you can touch the panel with your foot and open the cooler, so cool.

In testing the cooler for ice longevity we loaded it up and left it outside in Texas heat (think mid 90’s) and found that it kept things cool for a little over 2 days. It will work perfectly for the pool party, or tailgating, but if you’re going off the grid for days then this may not be the cooler for you. To me this cooler is a day cooler. A cooler that is made to party. A cooler that can be at home at pool, beach, backyard or tailgate. If you are an audiophile then you will fall in love with the deep bass and crisp treble notes that come from the Kube Sound.

-The Cleanest Styled Cooler we have seen

-The easiest opening cooler with the one touch open

Overall this cooler is built to party and look good doing it. If you’re ready for a cooler that looks as good as it sounds then the Kube Sound Cooler is for you!

Check out Kube Sound Cooler and get your own: https://kubesound.com/

*All of our reviews are NON PAID. We never get paid for a review (sample was provided by company to test), because its a conflict of interest! Most reviews from big brands you see are influenced by $$ never at Tailgating Challenge. Not now not ever. What you see are real opinions, good and bad. Check out more of our product reviews if you need the truth.