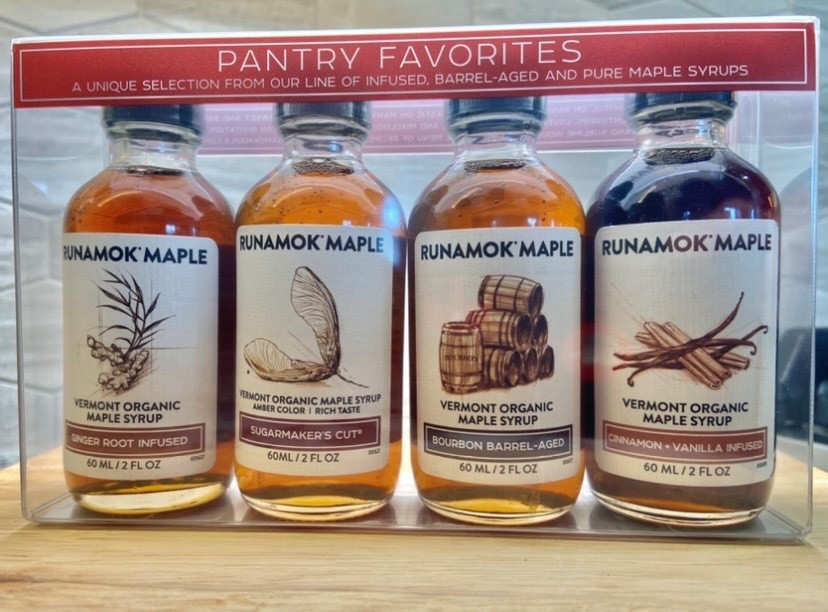 Maple syrup is awesome, but have you tried CRAFT flavor infused maple syrup? We check out the new craft syrup offerings in our Runamok Maple Syrup review, to see if they are better than standard maple syrup.

There is nothing like REAL maple syrup pouring over hot pancakes that came right off the griddle. Craft offerings took over the beer industry and we’ve even gotten into craft honey recently (see our Craft Honey Review HERE). Now it’s time for the world of craft to come to maple syrup.

Runamok is based in Vermont, home of some of the best sources of maple syrup in the country. They took their amazing maple syrup and then started to experiment and adding flavors that are sure to open the minds of anyone that has ever poured maple syrup onto a large stack of pancakes.

There were so many unique flavors to select from and we picked out 4 flavor offerings to dive deeper into. Ginger Root, Bourbon Barrel, Sugarmakers Cut, and Cinnamon Vanilla.

We started rolling the camera (see video below) as we took our first taste and smell tests of these Runamok Craft Maple Syrup offerings. When testing these I’m mainly looking for the unique flavor and the smell.

Let’s start with the smell. The Bourbon Barrel had just a hint of the bourbon smell, very mild and not overpowering. The Sugarmakers Cut (which is their traditional maple syrup) had a sweet aroma. The Cinnamon Vanilla had a strong cinnamon smell. Finally, the Ginger Root flavor also brought a strong ginger root smell to the party.

Next up, we tasted each of these flavor offerings, straight from the bottle. This way there was no competing flavors that could impact our taste tests.

Bourbon Barrel: this had just a hint of bourbon barrel flavor on the back end of this tasting. Very tasty overall and you can see my reaction in the video below of how surprised I was by the flavor.

Sugarmakers Cut: This was the sweetest of all the offerings and a solid overall maple syrup. Again this was the standard maple syrup offering and after tasting I knew why it was called SUGARmakers Cut.

Cinnamon Vanilla: This was the darkest colored of our samples and also had a strong cinnamon flavor. The power of the cinnamon overpowered any vanilla that my taste buds were able to detect. Excellent smell and flavor that is perfect for breakfast foods.

Ginger Root: This had great ginger flavor mixed with the sweet maple syrup. The more I ate of this one the more I liked of it. I was skeptical of this one at first, but this one surprised me the most of all that I tasted.

These all were an excellent topper for the hot pancakes that we pulled off the griddle. After this, we thought that these maple syrups could add some unique flavors to other food items. From cocktails to veggies these syrups can turn a basic dish into a crowd pleaser. We finished our night off with some bourbon barrel maple syrup drizzled over roasted brussel sprouts. It brought out a nice sweet flavor that could turn a boring veggie dish into the main attraction.

Overall, I’m a big fan of Runamok Maple Syrups. They have many more flavors that I know I’ll need to taste in the future. Now we want to know which flavor sounds the best to you and what should we put our syrup on next?

Love learning about all the cool, new products we get to test? Take a minute and see some of our recent PRODUCT REVIEWS.