There is nothing like a bowl of hot chili on a cold day. There are so many different styles of chili out there and we wanted to add something a little different for your next homegating party: Buffalo and IPA beer.

I started this recipe as the snow came down here in Loveland, CO. I LOVE a good bowl of chili when the weather outside is freezing. I’ve tried quite a few recipes over the years and each one brings something different to the party. Everyone knows I love a good beer and most beer chili recipes advise adding a light beer to the crockpot, but given that I’m a craft beer guy I felt a strong IPA could add a different flavor to our chili recipe. I chose a Telluride Brewing IPA to bring that flavor to this chili recipe.

In addition to bringing an IPA beer to this chili party I also wanted to upgrade the meat game and went from beef to buffalo. This brings out a leaner, better flavor to the chili.

Let’s take a look at what went into this Buffalo Beer Chili:

We then took the meat and veggies and sauteed these prior to putting into the crock pot. This brings out better flavor and helps cook your chili faster. We added the beer, tomato paste, diced tomatoes, and spices into the crock pot. We gave it a good stir and cut it on high and kicked back for 2 hours as the flavors started to meld together.

After 2 hours and some stirring/sampling during this time, it was time to eat. For toppers we had Extra Sharp cheddar cheese, diced onions (raw), and avocado. 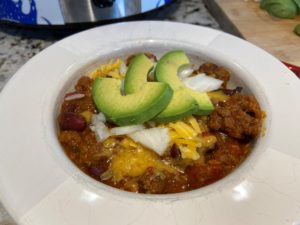 Now it came time for the most important part, TASTE TEST! The chili smelled great and the flavor was awesome. The IPA really brought a different side out of the chili and I’m going to try some other styles of beers in my chili in the future.

Love chili? Let us know what your favorite is and drop us a comment below if you have ever cooked with craft beer before?